The Dub "Western", new frontier of Ethnotronics. Bleeding Hut and the Western Tales

Dear friends of Miraloop, here we are again on our blog! Someone on social media asked us about our recent involvement with Western, so we’ve decided to scribble a few words about the subject of the Western “dub”, our musical experiment, 100%made in Miraloop.

We have to say that this “experiment” has already passed the exam: it’s doing well on the online store companies’ portals like Beatport, as well as on the dancefloors where it was tested for the first time. In the Miraloop studios we’ve been experimenting with dub already since 2013, when the first compilation “Look Beyond, the Evolution of Dub” was published and successfully got into the national- and not only national- charts. Since then we have never stopped. To talk about our idea of dub, it’s necessary to first explain what “dub” actually is: the name is derived from the word “dubbing” (meaning something like “transferring on a tape”), and it’s a genre born from reggae instrumental b-sides records from the 70s, which later developed into a stile per se. Our experiment started with taking the “essence” from this genre and reinterpreting it. We used the slow beat, syncopation with the “shuffle” drums, delicate sounds with powerful bass, and we took these elements out of the reggae territory, reinterpreting the genre but preserving its structure. When we published our first single of the project Ethiopia Ringaracka, which was moving dub into the futuristic, oriental African territory full of black magic, we hadn’t imagined what would follow. We went to Africa, India, and from there we’ve started to explore the genre and its possibilities. Our intuition took us even further: playing on those musical playgrounds we discovered that apart from looking only at the “geographical” sounds, that is the ones belonging to diverse parts of the world, we could also look at iconographic ones, those not connected to a given place, but to an imagery, like in case of the cinema. The first playground was the Wild West. There were many reasons: it was fun, because of the cinematographic culture of our country, and because the first demo of Red Plume thrilled us so much that we closed our studios for 3 weeks just to work this one single to perfection. The very first notes catapult you into another world, while the relentless tempo of the dub plays its musical game. Red Plume is exactly that.

So the first downtempo/dub record was Red Plume by Junio, a single released by Miraloop Spades (our electronic experimental label) and placed 1st in the Beatport’s charts for more than a week. Red Plume is a track with all the features of the cinematographic western imagery, for instance the distorted blues guitar united with the samples of the North-American tribal drums. The fact that the guitar tackles metal is totally in line with the “spaghetti” tradition, that is with the Western produced in Cinecittà, which gave us artists such as Ennio Moricone, whose music painted the wild landscapes so perfectly that now it’s the only reference in the musical narrative of the west.

But it’s in Bleeding Hut, the second western single of Junio, that the metal guitar comes about more evidently, with a number of triplets and a solo: an apotheosis for the dub genre. Bleeding is in fact a dub piece with the metal guitar, and what makes it a total novelty is the idea of applying this fusion to the downtempo beat of electronic music. After all, this kind of possibility was never explored before. 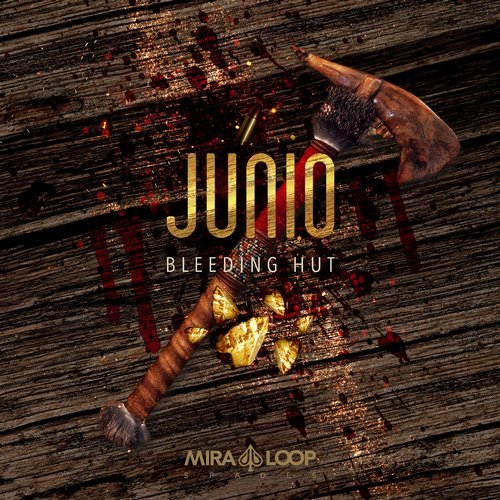 On the cover of Bleeding Hut your eyes can enjoy the western imagery in a truly iconic representation. Almost symbology: the golden dust and nuggets, a tomahawk, wood, blood. When the track starts it’s enough to close your eyes and increase the volume.

Bleeding Hut will be released in April 2018 exclusively on Beatport.com, classified as reggae-dub-dancehall, and bringing the metal guitars of the Wild West in a kinematic salsa to peep out on the territory painted by the sun, beaches, and marihuana. The dust takes the sun’s place above the beach and becomes a fiery sunset over the New Continent. Like a movie.

Now, after those two singles, the Miraloop Spades label is about to release the very first entirely Western dub CD. Titled Western Tales, it’ll be the second LP of an Italian artist Junio Fantoni – in the music world simply Junio – who inaugurated his artistic path voyaging through the jungles and deserts of India and Africa with his first album Elephant Paw. Now the artist is on the New Continent and for the rest of 2018 he’s going to dress in a dirty cowboy’s clothes. The album will contain 12 bombs, dusty and vicious, but overflowing with magic. Powerful bass with the typical relaxed mood of the slow dub beat. Apart from Red Plume and Bleeding, you will find other tracks, completely different from each other, from the nastiest Dirty Club to the lunar Cheap Lady, from the proud Butch to the magical Sciaman.

And above all, you won’t have to wait too long: the album has been completed in the recent days in the Miraloop Studios. Waiting for Western Tales, we wish you all the best stories, and … the best cinema.

Our last interview with Antonio

The last interview with Antonio Bellantoni, a few days before his death at the age of 38. An exchange of thoughts and words with the great Italian artist.antonio bellantoni,interview,producer,producer,producer,music producer,experimental music,ambient mus