After Find a Place, Pablo Ort comes back with Never Get Burned, the new version of 2017.

The song is told with images, through a complex procedure, handcrafted, certanely a little revolutionary. To create "the city", location of the song, it was built a table of assembled  motherboards, graphic cards and video cards. By using the macro video recording technique, the motherboards recorded up close look like a city. A city with districts, corners and colors. Circuits, transistors and leds transforms into streets and buildings.

This is not the end yet, because this is not a common city. Pablo Ort plays a very hard (and complex) character, the "lord of the world", that has fun in moving and changing entire neighborhoods until the city begin to burn. In order to burn the city it was set a fire to a 2 meters long table placed at the end of the construction, that produced all the smoke you see wrapping the "buildings" made of transistors.

The whole story ends with the vision of two cities of the world, Los Angeles and Lagos, in opposition to each other. One is the world where you don't get burned, the other is the world where you can risk, if someone wants: it is the social paradigm of wealth, of two worlds. Between these two worlds there is in common the dark presence of untouchable characters who play with people's lives. Through this social paradigm Pablo Ort dedicates his own, paraphrasing the real stories where even today there are those who risk getting burned, or more literally (get burned) to burn alive. Because there is also someone who will never burn. The one who won't ever burn is the one who does the games, who keeps the ranks of the puppet counter. In simple terms, the one who is in charge. "And you'll never get burned. 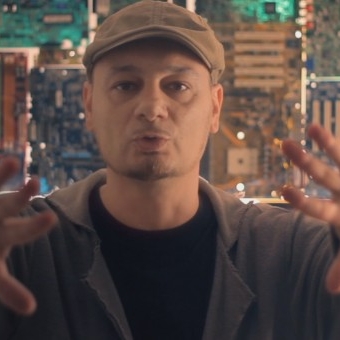 Our product store expands with two models of sporty T-Shirts to wear in all occasions...

Miraloop creates its own personal Snapback visor cap, a Made in Italy product designed by our design team...

Never Get Burned by Pablo Ort in a video clip where computer cards tell a story about a city.

Transpotec Verona: the video and photos of the even

From 22 to 25 February 2017 was held at the Verona Fair Transpotec, the Transport and Logistics Exhibition. Visirun is a company that has developed a software for the management of corporate fleets of which we take care of the communication