Mondi Nuovi: A tale of a journey outside the Earth...within oneself 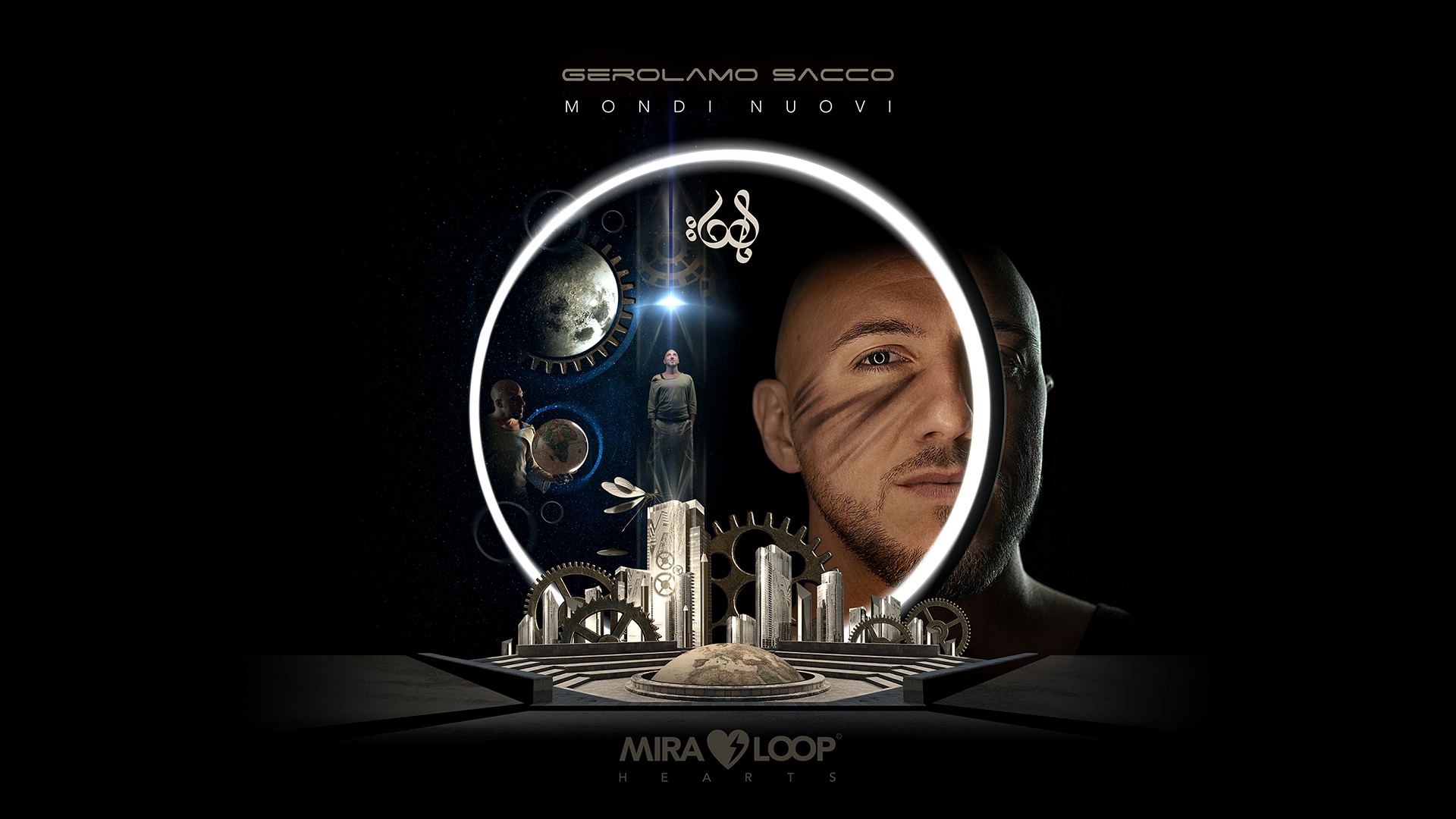 The continuation of Alieno

Alieno was the story of a magician of an indefinite age who arrived, as a result of a magic, in our days. Thrown into an hallucinating present made of machines, robots and dark clouds, he described the surrounding reality with the eyes of a child, even falling in love and finding inspiration for his own personal philosophy, in deep connection between past, present and future. At the end of the story a reality show where they send people around space becomes an excuse for the protagonist to break away from this society and escape to discover new dimensions. While "Alieno" is the first stone on which Gerolamo begins to tell and narrate himself in a metaphor of life, Mondi Nuovi is his natural continuation. Mondi Nuovi starts from the last earthly days of the protagonist. From the fourth song he is in space and the whole album takes place outside the orbit of our planet.
Between the two stories there is a substantial difference: this time it is no longer a description of the world, but an inner path outside of it, within themselves. After the first song that is the only one to tell about our society, we will immediately enter the head of the protagonist, we will know him and we will travel with him. Disillusionment and discovery make room for the challenge with reality.

Casa Mia opens the album, a song that blends It Pop of 2019 with extra-European sounds on a pressing Italian rap, between extrabeat and melodic: a potential radio hit that tells the story of a man's relationship with his planet and his life. All of humanity that "se ne va su Marte a cercare batteri mentre l'Amazzonia muore" (goes to Mars to look for bacteria while the Amazon dies) is tenderly mocked with a disenchanted and perhaps cynical eye, but never cold. On one hand the relationship with society, on the other that with himself: the protagonist knows he doesn't realize the beautiful things he has, because he feels out of place, he needs stability. At the same time he doesn't see reality for what it is (or maybe he doesn't want to see it), the one where he lives is not yet his home and all he has is a workshop where, in complete solitude, he "paints stars". This is the second passage: the stars represent dreams and the desire to achieve them with his own means, despite life going in the opposite direction. Through the story of a mechanic who paints stars on the wall of a workshop with motor oil and petrol, we also discover that there is a she. She is the person on whom he paints his stars, sentimentally binding himself, but who in Momo (the third song of the record) abandons him. And so the protagonist goes to town hoping to meet her again, but he doesn't even find the routes of the buses he used to take anymore. A bit like Stromae, a bit like Parov Stelar, the sampling of 20's swing sounds create a new and very danceable sound world in which getting lost is a rule: between melancholy, euphoria and adrenaline the protagonist is also lost, marked by the deep pain of a loss in which he tries to find himself.

The departure for the New Worlds (tracks 4-6)

This is how the protagonist of the story decides to leave the land and Cinema is the song of the departure: "una nave ci aspettava nel deserto, pronta a decollare verso i Mondi Nuovi" (a ship was waiting for us in the desert, ready to take off towards the New Worlds). The protagonist doesn't know exactly why he's doing it, but running away, for him, is the only way to go. Here, musically speaking, Gerolamo for the first half of the song is in the role of pure singer, supported only by the strings, for the second half music producer tout court, with an instrumental climax made of harmonic modulations and sounds in pure Hollywood blockbuster style. The lyrics instead describe this moving and exciting departure. The New Worlds start here. The desert from which the ship leaves becomes the inner desert of the protagonist, because now he is alone and will have to deal only with himself. A hypnotic loop that leaves no way out creates a sort of addiction in the listener, and supports the whole song and then lead to an EDM riff capable of making us dance and have fun ... although the theme is certainly not easy.
Two more words about Desert and its meaning: it basically about a person who has difficulty letting go emotionally, decides to take a path of self-realization and finds precisely the desert, that is, its aridity. He then decides to abandon himself to his inner self, to rest inside it and see if, trying to accept himself for what he is, things improve. Then he arrives in the desert, his inner self, lies on a dune and begins to contemplate the possibility of remaining there for a while (without water ... without mouthfuls). Little by little he realizes that he has the good in himself ("then at night...something can shine"). Then he tries to tell the person he has beside him sentimentally everything he really wants to tell her, which is, that she makes his world less arid ("you've ever seen it...you touch it), until she becomes aware of what it really is, really abandoning herself and starting to accept herself. And just when she accepts, she realizes that despite all the work she is doing on herself, the road is still long. But the first stage has been reached, the New Worlds have begun. In the sixth song, which then gives the title to the album, our hero is in space for some time now between darkness, loneliness and magic: he realizes what happened, he feels deep melancholy, he can not drive away thoughts because he is enclosed in the cabin of his spaceship and he misses her deeply. So the only way to escape is just that wonder that he did not know he had before. To describe this feeling Gerolamo uses techno, deep and symphonic influences creating an absolute "unicum", using the viola as if it were a synthesizer giving life to an hypnotic and sexy riff that remains in the head after just one listening.

Revelation, the dream, the encounter with her (tracks 7-12)

It will be right after the solitude and intuition of searching within oneself that will take the protagonist of Mondi Nuovi into a further phase, where the central point is the search for contact with the other. It will be this need that will lead him to see the first light: in "La Prima Estate del Mondo" (First Summer of the World) he arrives on a planet where he can finally connect with the person to whom he is linked. Among ships of a thousand colors that make trips between the worlds, beaches and dances looking at the sea from a space hotel, Gerolamo recreates a fantasy world in which the person he is in love with is exactly at the center of his thoughts.
However, when the two find themselves face to face in the slow electronic "Abisso" (he and she in a surreal world, represented by a beach where a storm is about to arrive) he discovers that there is something that does not work. The protagonist, having been able to clearly recognize his condition, can now see that of the person he loves, for which alien beaches with just two suns, the kisses, the hugs are not enough. She is evanescent: the horizon is about to disappear but she doesn't notice it. It will be this emotional storm that will take us to the "danza senza importanza" (dance without importance) of Notte di Foglie, the tenth track of the album, where the protagonist taking "inspiration from the wind that disperses everything" will still accept to love her, hoping with all his heart to be reciprocated because he can not help but choose. And so we come to Sei Come me, a search for confirmation by a fragile, sensitive person, but at the same time capable of a deep love.
Sei Come Me has an open, very open ending. This poignant immersion in feelings will have a happy ending only in the next song, il Mondo di Fianco, because only then will the protagonist finally accept himself and decide to go on. A happy ending but with a double meaning, in any way we wanted to interpret the story: whether she told him yes or no he will not stop, capable to face any challenge that life places before him.
We are in the deep space, real and imagined at the same time, described by a magnetic, magical electronic waltz.

Accepting, loving, building, and "Sarà già passato tutto". This brings us to the true narrative closing of the album, Buonanotte Terra, in which Gerolamo leaves a sort of musical testament to the listeners and concludes the story. The protagonist leaves everything behind and changes completely road: a vortex of strong emotions that rise to the final explosion with "Weltanschauung" (a German literary term translatable as "World Vision", used to define the art and the parallel reading of the artists), the only instrumental track of the record. Between musical inspirations from M83 to Blade Runner, in an atmosphere dominated by magical realism we arrive at the end of the story excited and with a lighter heart, maybe even a bit 'changed. "Between a smile and a tear, just like at the Cinema". In the end, if we know each other, we can't escape from ourselves even if we leave Earth: the "Mondi Nuovi" (New Worlds) are all within us.