Andrea Georgiou aka Geo From Hell, a 32 years old guy with Greek origins from Ravenna, managed to conquer the judges of Top Dj with his beats, mixes, music, and personality, winning the first edition of a talent show dedicated to Djs, aired on Sky. Geo From Hell has been making music since he was a kid, he worked around the world and even got to perform at one of the most legendary music festivals in the world- Tomorrowland. After that, he started his discographic career with Miraloop, releasing 8 singles, some of which reached international charts like Beatport Top100.

“Geo proved to be the most complete among the Top Dj contestants”, Albertino explains, “he has a great technique, vast knowledge of music and the studio production, as well as a mastery of the console. He was exactly a Dj-producer figure we were looking for”. They also noticed his peculiarity. “I got a sense of an outstanding musical sensitivity from his performances”, Stefano Fontana says with Lele Sacchi agreeing: “Geo is a mix of technique, studio, competence, and empathic capacity towards the public. He has a huge personality that I’ve noticed from the start”.

Here in Miraloop, we wish all the best to Geo and his great future: tomorrow he’s officially leaving our label, following the exclusive agreement with Sony Music he’ll be partnering with for quite a while. We hope Sony allows him the same artistic liberty, valuing the project. To everyone who is about to discover the “new” Geo: we wish you listened to all the CD published between the 2012 and 2013 under Miraloop Club’s supervision and with Hell’s Records. Musically, these are special: soft sound, delicate and “bad” at the same time, piercing vocals communicating the emotion without trespassing the thin line between pop and club music. Hard to top? We like to say: We’ll see. Miraloop’s productions (8 Hell’s Records singles) not only represent the discographic debut of Geo From Hell, but also some small independent successes, from the moment when 3 of them conquered Beatport Top100.

Black Album remains unfinished. In the catalogue you can see the black cover with a luminous title, with only 3 singles which were about to launch the Black Album by Geo From Hell. Have a nice listening and good luck to Andrea from our staff! 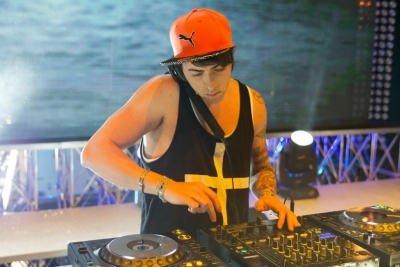 Geo From Hell wins Top Dj Italia: from Miraloop Clubs to Sony Music. After 8 records with Miraloop he publishes with Sony

Geo From Hell: Black Album, the first LP by the DJ from Emilia-Romagna , begins its work

Geo From Hell: Black Album, the first LP by the DJ from Emilia-Romagna , begins its work. The first single will be called Make Love.

Miraloop with Geo From Hell in the ranking years before TopDJ. Private Show in Beatport top100 in 2012 with Hell Records-Miraloop Clubs, third in 3 months