Hi Borz. Im so happy to finally talk to you! So at the end of June your first album is coming out..

Hi! Thanks!!.... yes, on the 24th June my first album is coming out! “Follia quotidiana” (Eng. Daily Madness). The title speaks for itself. It’s not a concept album, but it seems like one. Everything is mad... of course I’m joking... but is it me being mad or everyone else? We’re used to see the madness in others, to judge, moralize… but inside all of us there’s a mad joker!

Borz sings with the joker’ mask. This Joker! But does that mean that Borz is a bad guy?

There’s badness, comedy, emotionality, but most of all a lot of reality. It’s a folly of our day-to-day.

It’s enough if you look around you everyday!

Give me some examples.

All that’s happening, come on… Ok, let’s try: Have you ever watched canale 5 in the evening? There’s Barbara Durso. It’s one of many examples. Moralism that throws gasoline in the fire...

Now I’m with you, so you’ve chosen a bad character from a comic as a provocation. You’re antagonizing everything outside the comic, the cynical reality. The ignorance, false morality..

Good job. Let’s say that I’m in between the killer clown from the famous Steven King’s movie and the one from McDonalds.

Hahahah, well, quite interesting. And how do you express this concept from the musical perspective?

If you buy the album you’ll know. But you have to stop yourself from dancing to it!! And.. it’s not that easy. First of all my inspirations are Sigue Sigue Sputnik, Alice Cooper… But I wanted to do something new, unique, disrespectful. In one word something mad. The songs are continuously ironizing about the everyday life. Joker is one mask, but it’s as if there were many other masks. Joy, insanity, pain, love….I could continue...Every track is like a different mask…

A differnet mask? So Joker’s not the only approach…

Exactly! Let me give you an example. Angie and Rockstar are antipodes, Angie is a prayer dedicated to a person once dear to me who’s not around anymore, and Rockstar is a track dedicated to all politicians who buy hookers with my taxes. Angie is celestial, Rockstar is hell! But it’s not the hell like the one in metal, the hell of our days, to which we dance in the clubs. Generazione and Electroclown are almost opposites of the same thing, because in the Generazione’s joker is a mad spiritual guide, while in Electroclown he’s a…..clown, fun and thick. And Baby is love! I was going with my instinct, you know.

Is Follia Quotidiana a rock album?

Absolutely yes! Formally speaking maybe it’s not, because it doesn’t have the classic “band” sound to it, it’s more like Guetta/Skrillex. But who decided that rock is to be reduced to only this one style? Rock is an essence. The old devil of rock knows what it is and what it isn’t… If Mick Jagger does CDs with Will I Am there has to be a reason, I don’t think that Jagger had difficulty with finding some “rockers”.

I also think that by now, for many “doing rock” means following the already successful and celebrated stylistics! It’s interesting that you’ve decided to stray from that popular path.

I’m coming with 15 years of honorable service for punk rock, and punk rock is my life, however, every revolution after 20, 30 years takes a “face” and becomes a rule. I’ve preserved punk in my soul and put the cellar-sounds away for a while. Without the influence of Dubstep and Electro I wouldn’t be able to represent the madness of today’ life in such way.

And that where Gerolamo Sacco comes in the picture. How did you choose him?

You’ve finished the whole CD together?

Yes. With contribution from Johnny Pill, who wrote “Se Lei” and worked on some arrangements.

So Follia Quotidiana comes out under Miraloop Hearts. The pop/rock branch of Miraloop. Did you get along with the guys from this very young studio?

First of all, Miraloop is like recording companies from good old days, which is how I like it. They make their albums, do own design, etc. Many who today call themselves “labels” are actually just CD-printing companies or booking agencies. And I wanted to do it artistically. There are more recording studios than butchers in Modena! Not even mentioning the “labels”. With Miraloop you develop a special, magical relationship. You know, I believe in destiny, or rather in the situations which become magic, and the magic becomes destiny. Mira is still a small label but their catalogue is on any medium-big label’s level, they have people doing drum&bass that you never get to see, they’re French or Canadian. With the people here in Emilia Romagna we created a family. With Miraloop Hearts, which will publish Follia Quotidiana, we have a really unique pop/rock scene in our hands, we have the sound, and we have our message.

Do you see this CD as a mature thing or just a start?

Who are you dedicating it to?

I’m dedicating it to two people who are not around anymore, but mean everything to me. My two landmarks: my cousin and my dad. It’s all thanks to them that I’m facing this splendid journey.

I’d say that there’s nothing else to add than good luck! For everything! 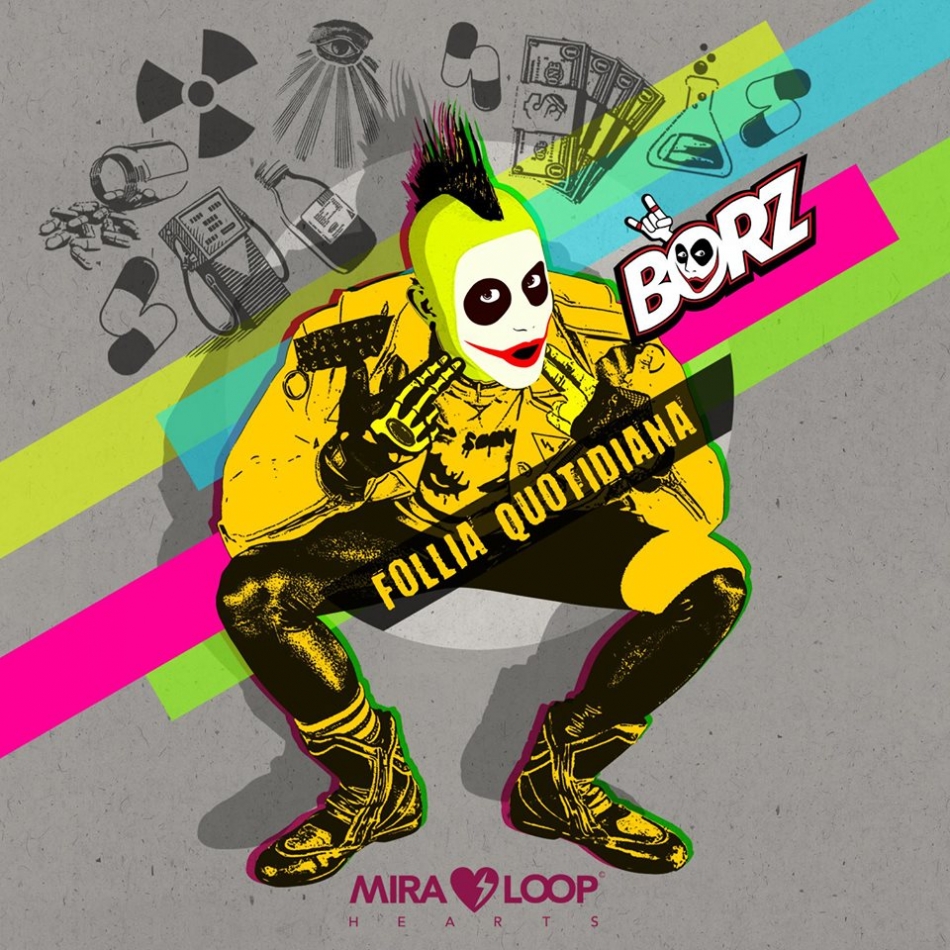 Borz 2014 vs Jovanotti 2015, the weird coincidences of music

A funny pic for Jovanotti and Borz' fan. Is it just a coincidence? Or is it?

Generazione "reloaded" (2015) version by Borz with the official video clip

The generation of those born in the 80's has a problem. It doesn't find itself with the world around them. The problem of Xennials in a powerful electropop track

Radio Noise interviews Borz, at the launch of his project

Radio Rumore interviews Borz, at the launch of his project with Miraloop. A great new electropop for the rock punk scene in Modena.