The next album that we will release in the Diamonds series will be by an artist who comes from the world of pop (in the attached photos you see him with the big Red Ronnie during one of his shows), and as such, completely different from the others who published on this label, known more for its electroacoustic and contemporary than for incursions into the world of music "in pictures", as they call it in schools. Delord, the stage name of Christian Carlino, is the exact opposite of everything you have seen so far from us. Delord is self-taught, Delord doesn't know what a concert organized by an academy is. Delord doesn't want to go abroad because there is more public money because he has never done anything with public money. Delord is not a technical musician, Delord writes by ear on the keyboard, Delord has not studied 10 years in the conservatory because he works since he finished high school and started playing when he was already working. Delord has an audience of boys and girls who dream with him. Delord goes to the theatres to play and between one song and the next he tells people what he thinks about the world and how it would change it. Delord writes simple, very simple music. If we want to reach the limit of the banal, compared to our canons for which "research" is everything: but Delord doesn't look, he just finds, and what he finds sounds, and works. Musicians like him are said to be "people who bring classical music closer to the public": in reality his music has nothing classical about it. No counterpoint or writing techniques. We are not even sure if he can perform classical piano repertoire, since the current piano standard takes hours a day for years and better if you start as a child, if not it's almost impossible. His melodies are just simple melodies played with the piano, or even, with the keyboard. We will allow ourselves to publish in Diamonds things played with the keyboard. We want, for a moment, to put something in Miraloop Diamonds that is not intellectually constructed and to get closer to other musical realms. We want to give Christian the opportunity to make his melodies heard in a sound context that belongs to him but without us could not approach. We would like young pianists to play his melodies in the conservatories. Sognare Part 2 will be published at the end of 2012 with our series, produced by Gerolamo Sacco, who is also co-composer in two tracks, "Lola Corre" and "Il Viaggio". Have fun! 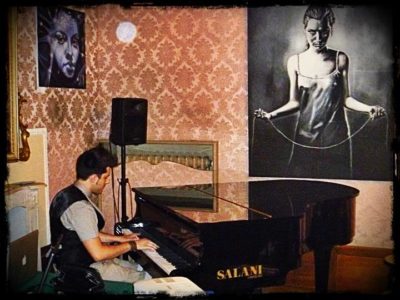 Gerolamo Sacco, producer and co-author of Delord's Sognare part 2, will paint on stage at the Teatro la Venere during Christian's piano performance.

Diamonds opens the Cinematics section with Delord, Sognare part 2. Incursions in piano pop to give life to more expressive possibilities.

Delord comes back to Miraloop. Interview

Christian Delord Carlino leaves DNR to open a piano project with Miraloop, is the artistic turning point from keyboardist Jrock to pianist in theater

We are in 2008 and Miraloop brings an emerging band to their first concert at Alcatraz in Milan, is Visual Evolution