Miraloop made its way to the market in 2009, the era of a total transformation of the web. It’s the beginning of the end of Myspace (which was brought to a definite end in 2010), it’s the first steps of YouTube, and the mass explosion of Facebook. Three years after, the arrival of streaming still has all the cards. Miraloop together with Made in Etaly (today’s Believe Italia) is one of the first labels to stipulate an agreement regarding the monetisation of tracks with Google. In its first 5 years, Miraloop has created 80 recording brands for musicians that had never published before practically from scratch, having come cases of success on a very low budget. Some of the musical histories we created are now companies operating on fields like live shows, digital TV, in general- creativity. Now we’ve been noticed by companies that aim at reducing the marketing campaigns’ costs in order to make commercial strategies based on rich content and flair. We’d like to show you two works from 2015, which seem to be completely diverse. Actually, it’s one person who brings about two totally different brands. Our Gerolamo, an artist and a producer, and the biggest Acquapark in Europe. This double intention brought fortune to both summer season of the popular Acquapark and Gerolamo’s album, which turned out to be one of the best sellers on iTunes, staying in Italian Top 20 for three days. 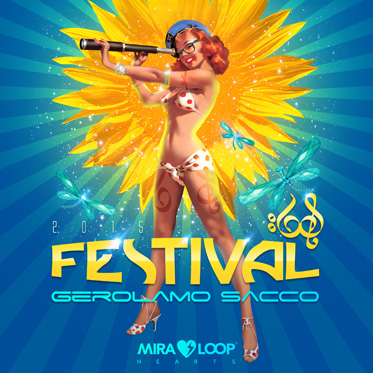 The album appeared on iTunes on July 23, 2015, the day of its publication, and for four days enjoyed the status of one of the bestselling albums together with some really popular artists, such as Jovanotti or Francesca Michielin, reaching the 14th place on the 25th. Accounting for the fact that Gerolamo, unlike his colleagues from the chart, is not on TV every single day, we can say that all this resulted from our successful campaign we’re very proud of. A vintage girl from the ‘50s, together with the revisited psychedelic, pop imagery and minimal, but immediate colors and citations. The dragon fly, her glasses, costume and heels – every detail bears a musical message. The sounds takes care of the rest, obviously. In fact, Festival was a huge, independent success, surely influenced by its innovative musical level.

This was the campaign which allowed us to design the advertising structure never seen before in music industry because of the budget reasons. We had the chance to dive in the editorial world- we used billboards and print media , as well as got in touch with the urban furtniture- in the summer of 2015 Bologna will be adorned in vintage green and blue. On Facebook the campaign appeared on „Viaggio Della Salute Più” page, included as a „case study” in Italy for 2014-2015 and at the same time experiencing a 140% spike of registrations.

Villaggio della Salute Più: this is the official video made by Miraloop for the Acquapark season 2016, original music Infinito (Gerolamo Sacco).

Facebook chooses the Health Village Plus as its national case study for 2014 for the creative use of the portal. The operation is managed by the agency Elyca (Miraloop) on behalf of Essepienne SPA.

Villaggio della Salute Più: this video realized by Miraloop is dedicated to the Acquapark with the collaboration of the original music by Giampiero Gemini.